The Spider Who Took Liberties...

This morning I was sleeping peacefully when I felt eyes on me. I shifted my weight in bed and turned toward the wall. My eyes popped open and I came eye to eye with a black spider. He was on the wall about a foot to the left of my table lamp. Sure, he was three feet from the edge of my bed. But still. He was in the house where I figure he did not belong. I mean, even if he’d been in the basement I would have given him some slack. But no he was in my space. And that called for action.

I lost no time putting my feet on the floor. I headed to the kitchen to find a weapon. I was no match for that fellow, Lord knows. I found a flip flop that seemed to be up to the job. Returning to the bedroom I noted he was waiting for me, same position, same glassy stare, same ugly black velvety body.

Here is a photo of where the stand-off took place. No pictures of the enemy as I would then be afraid of the photo and convinced that he was living in my camera. Nada. Nope. No photos of him. 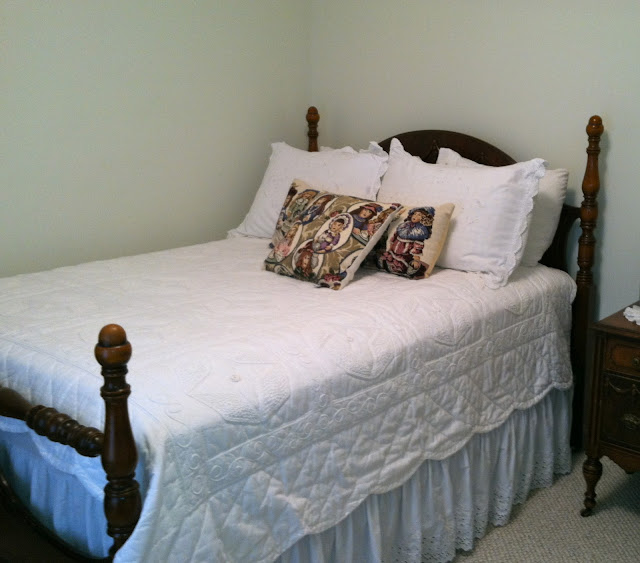 First - scream! Then - charge! Then - whack! The flip flop provided an ample weapon and he went the way of all the other spiders I have chanced to encounter in this house recently, into the trash. He will be riding outside shortly in that large white bag with the rest of the trash and deposited in the garbage can with the lid tightly sealed, where he cannot come back alive and bother me anymore. Out of sight but, no, still not quite out of mind.

What a way to start the morning. R informed me the same spider had been in the bathroom earlier. He had escaped R’s invitation to get out of the shower and disappeared down the drain or under the shower ledge and out of sight.

Satisfied his job was over, R departed to the living room to get the morning news from TV and left me alone, to deal with the brazen spider. It was then the invader decided to take liberties and trotted on his many feet from the bathroom nearby to the wall by my bed where he scared the bejibbers out of me.

Now I’m faced with a dilemma. I recently bought spider bombs because there have been other spider sightings.  My plan was to put the bombs off in the basement and vacate the house for the day, while the bombs did their job, getting rid of all the spiders and bugs who live behind the walls, in the vents, or wherever else bugs live in a house.

After reading the label on the spider bombs, I’m now as afraid of the stuff inside the bombs as I am of the spiders.

What do I do? Help! I’m in a quandary. Do I live with the creatures or endanger my life further by putting chemicals in the house? Do I move outside since all the bugs seem to be in the house. Jeez.

Has anyone had this problem? Do you mind spiders and bugs in the house? Do you use bug bombs?

And yes I'm sure I'll hear from my one friend who is a devout believer that we should leave all such creatures alone and let them go about their business as we go about ours. Even if they choose to stare at us from our bedroom wall.

Popular posts from this blog

Rewriting/ Quotes by other writers

March 10, 2011
Sometimes beginning writers say they don't believe in rewriting because they're afraid they'll "lose the spontaneity" of the first draft. This is naive; rewriting means making the work better by adding, deleting, and revising; what worked well in the first draft stays--that's the effective spontaneity. Most professional writers know the heady sense of control that comes with the revision process--this is where one knows one has mastery of the writing craft. Note the following comments. Not sure who wrote the above intro but the quotes below are worthy of sharing. Enjoy!

"It is no sign of weakness or defeat that your manuscript ends up in need of major surgery. This is common in all writing and among the best of writers."
- E. B. White

"I don't write easily or rapidly. My first draft usually has only a few elements worth keeping. I have to find what those are and build from them and throw out what doesn't work, or what simply is not aliv…
14 comments
Read more

My Favorite Essay by Gladys Taber

From an essay by Gladys Taber
Family Circle  - September 1982

I sat in the sun the other day while the dogs dug up the lawn and thought about work. I wasn’t working. I was just thinking about it. I have found that when I cannot possibly accomplish everything I am supposed to and feel an unbearable pressure---as all homemakers must---if I just stop, life goes better.
I get a good book, make some spiced tea and sit down on my own corner of the sofa or in my favorite lawn chair. I let life settle in around me, and that is the only way I can express it. After 20 minutes or half an hour, I go back to the mechanics of living.  AND at days end I am just as far along as if I had not stopped to think.

Another of her thoughts: time for thinking is a gift one can give only to one’s self.


Hope you enjoy reading this as much as I have over the years. When I've had it with my life some days -  I have only to sit down with a glass of sweet tea and think of this essay an…
17 comments
Read more

October 17, 2017
This year when my children brought home their school pictures, I cringed. These kids can leave home looking cherubic, but the minute they pose for that school photographer they are transposed into unrecognizable beings. My middle daughter brought home pictures bearing her name and room number that couldn't have been my offspring. Nor a distant relative.
I had worked for hours on this child. Her hair was parted in the middle and drawn into a cute little ponytail over each ear. Even though she is at an awkward age, she looked adorable when she went out that door. Her missing front teeth only added to her charm. The kid in the picture has her mouth open wide displaying ugly dark gaps. Her one visible ponytail is lopsided, her part is uneven, and her bangs look like they were cut with pinking shears. I know this isn't my child because I always give my children a good haircut before they have their pictures taken. The only thing vaguely familiar is the sweater the child has on. My dau…
1 comment
Read more

B. WHITTINGTON
I'm a mother of three daughters, grandmother of eight, and author of the novel Vada Faith; also a collection of short stories titled Ezra and Other Stories. The collection includes stories such as Joy Ruth and Minnie Hendrix published in UK by #4 World Wide Writers Magazine and Mabel and the Garage Sale which was broadcast worldwide on N.P.R. by B.B.C. Books currently available on Amazon. Also on Amazon is my short story Dear Anne: Love Letters from Nam, fictional letters from a soldier to his wife back home. My latest novel was released May 22, 2017. Titled Missing: Sweet Baby James. A fun new read.